Technical questions regarding the XTC tools and programming with XMOS.
57 posts


Are others sending the audio box back for the fix?
I follow the this topic on the audioscienc-forum quite closely, but currently I didn’t read about any case where this item was sent back to china or was repaired.
Probably most people are afraid of the high shipping cost and very long shipping time and still hope for a software fix.
So they hesitate because the box is not completely “dead”… if it would completely bricked I think the situation would be different.
(Think most people like me outside asian region buy this devices on amazon. The devices are shipped from a domestic dispatch warehouse but the seller is still smls/ shenzenaudio or other traders in asia.)


How difficult is it to open this box to get access to the PCB?
I didn’t opened my device, but the owner and expert from the audioscience-forum opened his device to investigate this mentioned “thermal issue”.
From outside the box looks pretty easy to open (just some torx or imbus drawers on the front and back, the rest is just an aluminium block),
but he writes it was a bit challenging see: https://www.audiosciencereview.com/foru ... sis.10348/


Are you a hardware developer?
No, my main development occupation is about business software, web development and there backends.
In my spare time I just do some experiments with arduino stuff, but don’t have much hardware-dev experience.


If the box contained a JTAG like tool, called xtag3 for Xmos developers, then the fix would have been rather simple.
Just run xflash using xtag3 --> correct the flash and retry the upgrade. However, do not see this on the design.
Noting the above, wonder if there is a market for an affordable tool to fix the issue?
Yes already came across this JTAG Programmer. For the SMSL M500 I didn’t found something on the internet, but I stumbled upon something interesting:
There is a DAC “d5” from the company “sabaj” and to update the firmware of this device a external tool is needed. This is available on aliexpress..See links below:
(Smsl and Sabaj seem to be very close to each other... if they are not even the same company.)
https://www.aliexpress.com/i/4000879753082.html
https://www.audiosciencereview.com/foru ... 561/page-2


Not wanting to purchase this rather expensive box for development but will do so if there is a business model with a return on investment.
Personally not an audio developer and neither is our company but after seeing the margins in this field perhaps we should consider it.
Yes maybe you should :-D , the key to success would be to be close to the customer to avoid a situation like the one we have now, where the equipment has to be sent halfway around the world. Think that many people would send in the devices, because most people still like their M500 (or other similar devices) very much (because of the good sound and also special features like MQA which are not so often found). Because even if it is quite expensive with 300- 400 bugs, it is "just" the lower to midrange price range and therefore it's at least for "normal mere mortals" audiophiles more affordable than other stuff on the market. (Maybe modifications and fixing design flaws (like this heating issue) is also a business model)

Hi. Thanks for your alert. Have posted some dialog on this topic here:

Did email SMSL factory (Kelly) on Saturday and they did reply this morning, including details from their Engineering Manager. This is promising support.

The shipped systems do not have the ability to reprogram the external flash memory device as-is. That is, external hardware is necessary to fix the firmware.

As suspected, the issue is DFU related (as per my post on the above audio forum).

Reviewing now to see if the issue can be resolved using only software - believe there is a possibility of this fix but need quality time to test with our in-house XMOS tools.

Tomorrow they will share with us on how to open the M500 box but hoping this will not be necessary - as we do not have access to this product.

Hello, yes I saw your post in the forum.

Already really interesting details!
A good sign that smsl is answering at all and I'm curious how the story ends.
Really looking forward for further details.

Hi, did anyone find solution to fix stuck M500 on 1.5 firmware? I've read https://www.audiosciencereview.com/foru ... hread.9547, but found nothing except sending M500 to the SMSL factory.
Top

It was myself working on this case. After much waiting, ended up purchasing a defunct firmware from an audiophile in Australia. The unit is now in the lab. It took a few days of dialog to gather how to open the unit without damage to the enclosure. The company helped initially but has now gone silent on few other questions we had raised. They state that only the first batch of this box is impacted by the firmware bug.

In hindsight, opening of the crammed enclosure is not difficult but the flat ribbon cables that mate with the front side panel are very tight. Our thoughts are to just not care about their original short cables and apply a longer version of the same cables. Before we can do this, we need to know of the pitch of the fpc (flat cable) and the total # of contacts. As noted, the factory did not respond to this simple request. To date they have gone silent.

The firmware to fix the units is encrypted and we have this firmware in the lab. Using our tools + proper replacement cables, the fix should be possible.

A local Canadian customer noted that he was able to get the reseller on Amazon to swap out his box. Is that a possibility for you? Have your purchased the box through Amazon?

If not, where are you located? As of this writing, we do not have the full confidence on the replacement cables but during our last review, the suppliers of the cables are in Shenzhen at affordable costs. Otherwise, Molex should have the proper cables but at a multiple times higher cost in the North American market.

In summary, we do feel confident that the units can be repaired and their factory is doing the same - that is to reflash the target IC directly but the box needs to be opened. We just have not had the time to explore to fix this quirk over the USB interface which XMOS believes is not possible. Have some ideas on a possible s/w only fix but it is a gamble of our limited time. According to their factory, the number of units impacted by this are limited but not sure of this statement.

Currently on hold on this review as there was no response on the loaner unit and then we had to purchase the defunct box and now no support from the factory. However, do feel confident that the cables can be sourced.

Are you in the US or Canada? Any chance you have a local cell phone tech who can handle surface mount chip removal and soldering? The target flash chip is a simple 8 pin SOIC package that is quite easy to remove.

Thanks a lot for the quick response!
I'm not located in US or Canada and I'm also not being able to send faulty M500 unit to the SMSL. So I've decided to try approach mentioned from you side:
- purchase new longer replacement cable (something like https://www.ebay.com/itm/5-Pcs-FFC-Flex ... 3528259952 at least 20 cm long)
-- pin number and pitch can be measured without full front panel disassembly (for example take a photo of cable inside the unit or use available photos from audiosciencereview M500 teardown)
-- cable can be replaced even after full disassembly (in that case unit will not be operational until new longer cable arrives)
-- in worst case short cable can be manually extended by cutting in half and soldering wires in between (ugly solution, but should work)
- purchase heatgun and desolder flash chip (it should be easy enough - just do some basic practice on old electronics before actual process)
- purchase programmer tool suitable for the chip and try solution provided few posts above
I will be posting progress here, however shipping process for the required parts mentioned above might take more than 1 month.
Top

So far I was able to disassemble and assemble back M500. It was slightly hard to attach display cable back to the digital processing board, but still manageable. Below some pictures.
Display connection cable with some rulers: 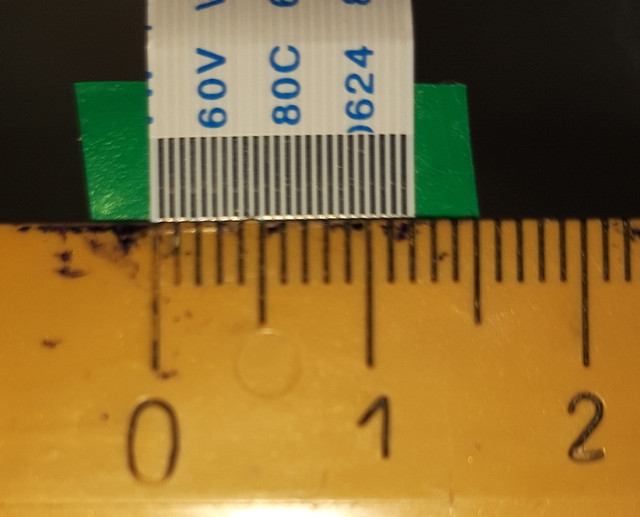 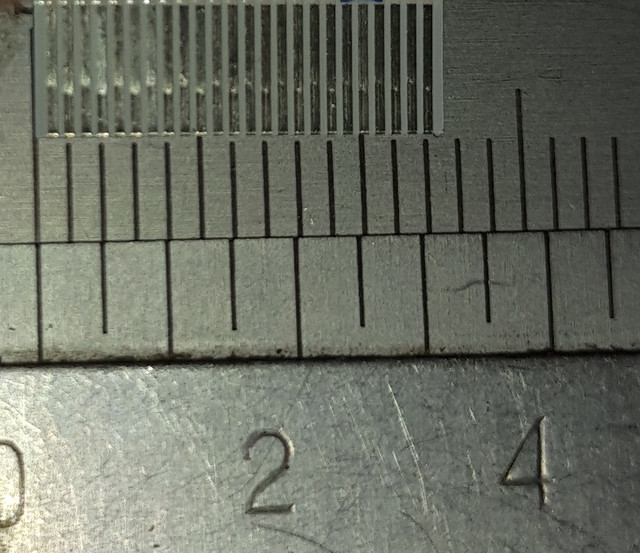 Flash with firmware "Winbond W25X40CLSNIG" and a port, which might be allow direct access to the firmware or XMOS programming: 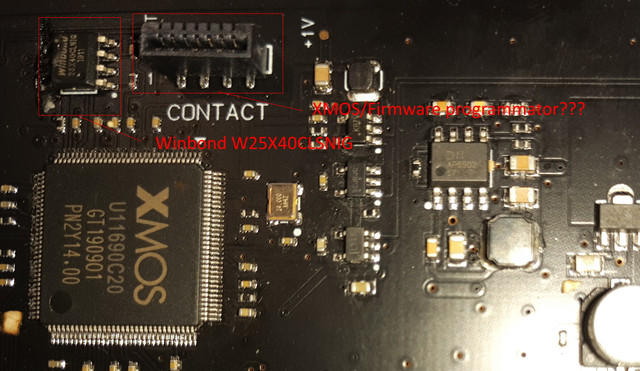 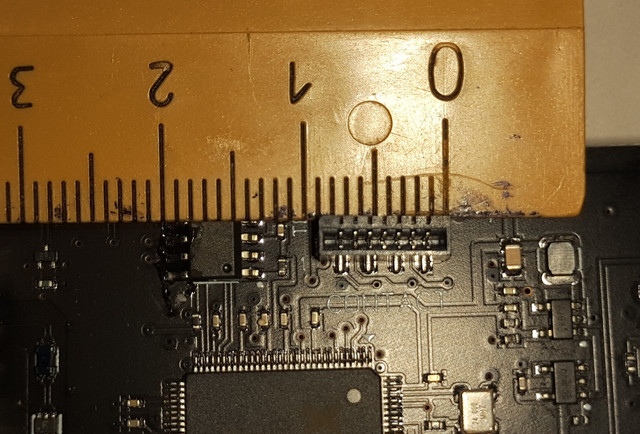 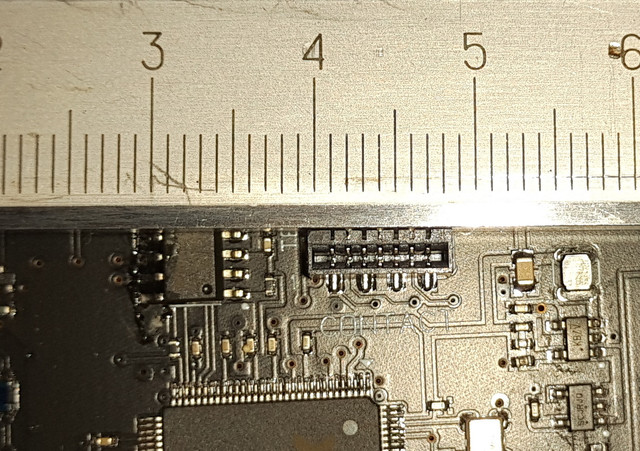 Few questions:
- Will it be possible to use (maybe with cable rewiring) in order to re-flash M500 using connection from the above photo?
- Should I purchase and try to dump/restore M500 firmware? Already got heatgun from a friend, which could help me with flash de-soldering if this will be required.
Please let me know which step should I do next or which tool is better to purchase for firmware fix?
Last edited by jdoe on Thu Sep 24, 2020 1:55 am, edited 1 time in total.
Top

Hi. Just saw this fresh post as for some reason, did not receive an alert.

Can you repost your pictures? Unable to see them at this time.

No idea what the first tool is on your Amazon link. However, the second tool is what we deemed to be correct for this repair. Respectively, we sourced the same tool and is in the lab.

Openly, was not happy with the zero force spring clips supplied with this programmer. According to our limited research on these clips, there are quality differences. While there are full programmers at this cost, the higher grade zero force sockets are more than this kit!

We can post a dump here of the working firmware that was supplied to us from SMSL factory.

Then using the kit in your second link AND a wire to ground the #RESET pin of the XMOS CPU should allow you to reflash the firmware.

You will need to run the programming software on a windows pc.

It is vital that you proceed carefully else the pcb can be damaged. The trick is to use the external programmer to reflash the soldered flash ic but before you can, the XMOS CPU must be parked to release the spi flash interface lines (place the CPU in reset during this entire process).

Did you source the longer flat ribbon cables? Which length, which pitch and which # of conductors worked for you? Which vendor?

We have written down the same details but had a higher priority project in development that placed this on hold.

Are you comfortable to solder a wire on the PCB?

Will be easier if you can do this. Or you can ask some local cell phone repair dude or dudette to help you with this.
Top

I've fixed pictures, hope you can see them now.
Yes, soldering a single wire to the PCB should be an easy task. I've ordered kit from the second link, hopefully it will arrive in 1 month.
No need to worry about display ribbon cable, I was able to properly attach it back after unit disassembly. It has 24 pins on one side only, each pin a about 0.3 mm wide and 0.2 mm gaps between them. Total ribbon cable width is 12.5 mm.
Top

I have an m500, it's stuck on fw 1.5 too. I bought a programmer for it, I opened the box already, and I like to try this repair.
Please send me the working firmware that was supplied by SMSL factory if you can.
My e-mail is: k.zoltan.miklos@gmail.com